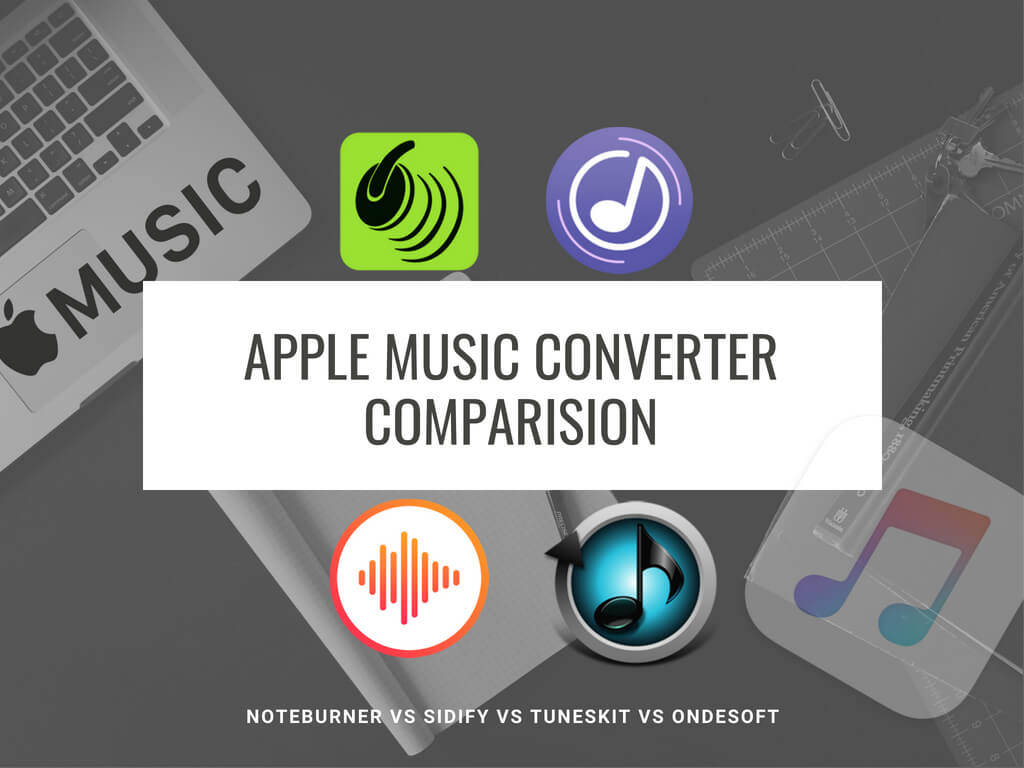 The audio recording software is widely used to record the sound picked up by the microphone to a digital form by the process of sampling. As to Apple Music, the audio recorder could record the Apple Music songs once you hit Play. This solution seems quite conveniently. However, we does not recommend this solution for three main reasons. 1. Audio recorder can’t split the song correctly sometimes. It happens that the recorded one song may contain two or more tracks in. 2. You are forced to do nothing on the computer while recording. The Apple Music audio recording process may be interrupted by some other actions on computer. 3. Long recording time. The most downside of Audio recorder is its slow recording speed. Say, you want to record an Apple Music playlist which includes 5 songs, with 18 minutes length, you will get the recorded Apple Music playlist equal or longer than 18 minutes.

The Apple Music Converters we list to compare in this post have different features and include fantastic function. Let’s explore.

This Apple Music DRM removal takes you only 3 steps to turn Apple Music to MP3, AAC or FLAC, WAV audio files. It enables you to download albums at a time and have it all in a centered easy spot like iTunes. Check the review >> 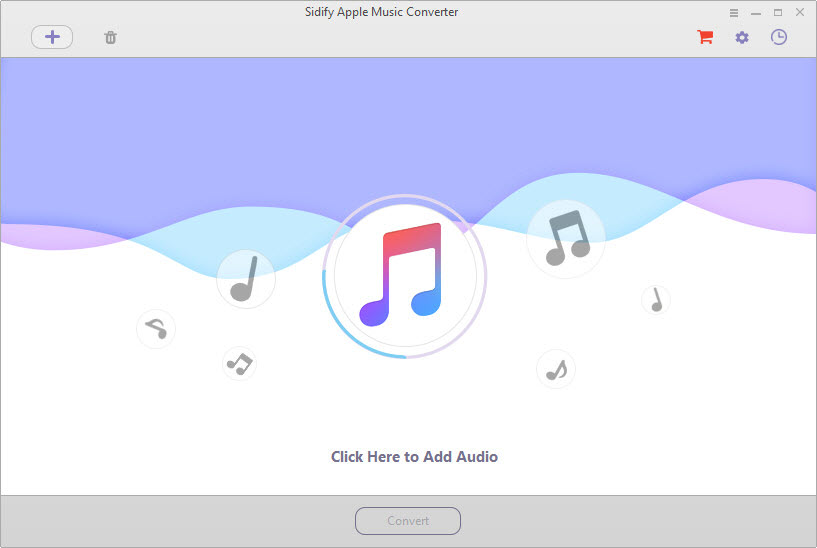 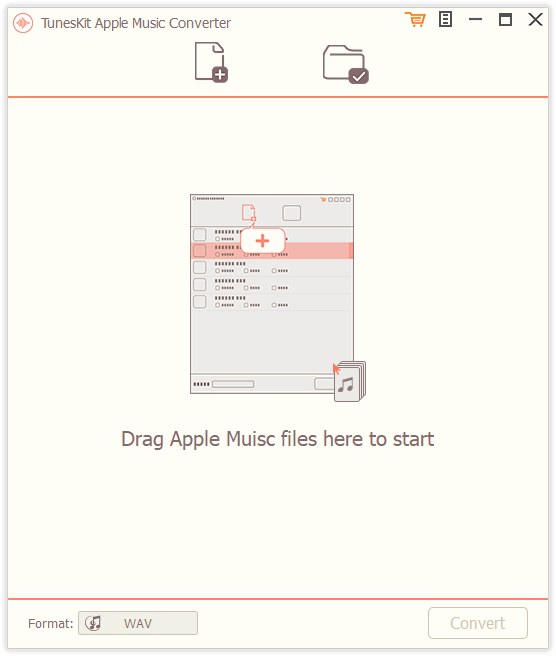 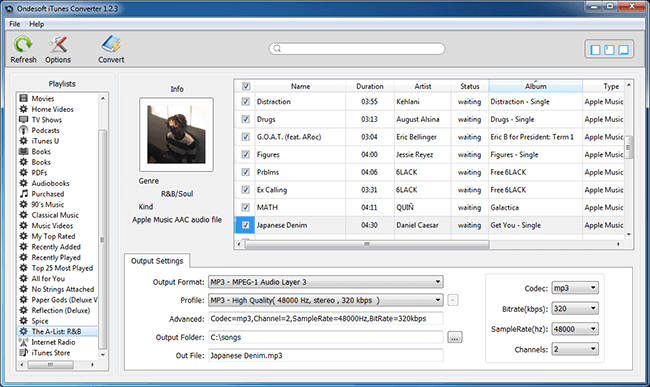 There are multiple formats digital music comes in, with two of the most popular being AAC and MP3. Exporting music to MP3 or AAC audio format means most digital devices and media players could play them. Unless you have specific needs that suggest otherwise, MP3 and AAC are clear choices. Let’s check what else output formats the Apple Music Converters support.

Both WAV and AIFF are uncompressed formats, which means they are exact copies of the original source audio. Since they’re uncompressed, they take up a lot of unnecessary space. Unless you want to edit the audio, you don’t need to store the audio in these two formats.

FLAC (the free lossless audio codec) is the most popular lossless format, making it a good choice if you want to store your music in lossless. Unlike WAV and AIFF, it takes up a lot less space, while the audio quality is still the same as the original source. It is better for listening than WAV and AIFF.

M4R file is an iTunes Ringtone file. They can be created and transferred to an iPhone in order to use custom ringtone sounds.

In general, we recommend using MP3 or AAC. They’re compatible with nearly every player out there, and both are indistinguishable from the original source if encoded at a high bitrate. What we need to consider is whether the Apple Music Converter could convert the songs to MP3 or AAC at high bitrate to get high quality output audio. NoteBurner iTunes DRM Audio Converter offers 4 options to select the audio quality: 128 bitrate, 192 bitrate, 256 bitrate, 320 bitrate.

ID 3 tags metadata is the information about the data. The embedded track data will contain things like the title, artist, album name and so on. Keeping ID3 tags is important if you want to show the name of your song, the order, the cover, or any other identifying information that would make your show indexable and searchable. Apple Music tracks are with ID3 tags. And fortunately, each Apple Music Converters can convert the Apple Music songs with ID3 tags retained.

According to the testing result, we can find some slight difference between the claimed speed and actual conversion time. Apparently, Tuneskit Apple Music Converter is exaggerated.

Different from audio recording software, these Apple Music Converter could detect your iTunes Library, and load them in the program automatically. That saves you time and hard work to find the song and add to load for converting. And the loaded iTunes library is the same as what it looks in iTunes. You could select the playlist or album conveniently.

Keeping chapter when converting audiobook is a necessity for audiobook lovers. If you have multi-hour long audiobooks, obviously you can’t sit and listen for 10 hours or more time. With chapters retained, the audiobooks will be read as the books, no matter when you want to listen, you can access to the recent chapter. NoteBurner, Sidify and Ondesoft have the ability to convert audiobooks, however, only NoteBurner iTunes DRM Audio Converter and Ondesoft iTunes Converter could preserve chapters.

None of the Apple Music Converters has the built-in burn to CD feature. Although you can burn the converted Apple Music to CD with iTunes, it is better to finish the task directly in program.

All the Apple Music Converters can run on both Windows and Mac platform. As these Apple Music Converter’working reply on iTunes, the iTunes version support is vital important. As the Windows version of iTunes introduced in April, 2018, NoteBurner iTunes DRM Audio Converter and Ondesoft iTunes Converter updated to support. If you use Windows 10 and download iTunes from Windows store, just buy either NoteBurner or Ondesoft.

We believe no matter which of the four Apple Music Converter you purchase, these tools could help you convert Apple Music songs in batch and export in most of the popular formats like MP3, AAC with high quality preserved.

People who liked this also liked…

People who liked this also liked…